What is Svchost.exe Host Process for Windows Services? How to Fix it?

Get GarageBand on Your Windows PC – A Complete Guide

Download and Use of An Auto Clicker for Windows 10 – A Full Guide on Mouse Clickers! 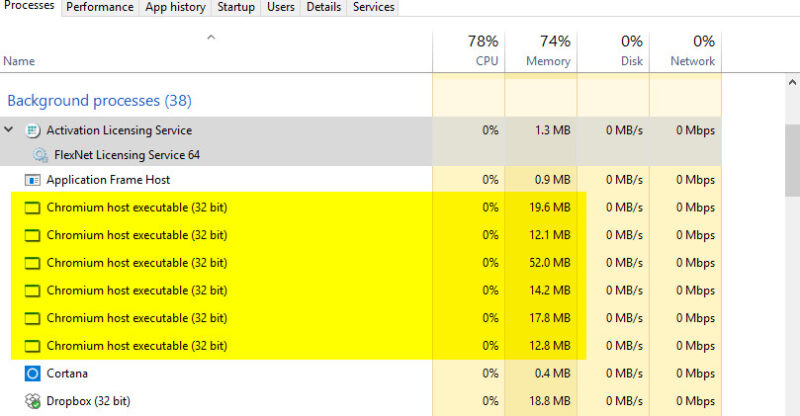 If you have been already using any software or product from Autodesk, you have probably faced “Chromium Host Executable (32 bit)” issue onced in your digital work life. As we all know, Autodesk is a well-known company specialize in Educational and Professional software solutions i.e. AutoCad which is majorly being used by the students and professionals. Since the softwares are designed for the heavy work-load and supposed to deliver high performance, the issue like “chromium host executable autocad” occurs sometimes due to high CPU usage of your computer system. In high CPU usage, the PC turns tipsy and behaves like anonymously sometimes.

We’ve seen many posts and threads asking about how to solve the “chromium host executable” issue on various public forums but however they are not getting proper answers on it though. So, here we’ve decided to go through it deeply with a glass of beer, analyse the issues, know the facts on the same, and write this guide to get you out of this issue. Also, we’ve noticed that the people having this issue are mainly the audience of Autocad software only. Just have a look on what people asked on forums:

Some people named this issue as a virus but to be very precise, this is not a virus. Actually, it’s a normal issue faced by the users who are using any software or product of Autodesk on their Windows PC. Generally, the “Chromium Host Executable (32 bit)” comes when your system pushes their high CPU usage limit to fulfill the essential amount of resource required to perform and run operations of the AutoCad software. If you go through the task manager, you would clearly see that the software named “Chromium Host Executable” or “acwebbrowser.exe (32 bit)” is occupying a very high amount of CPU and Memory resources as compared to all running programs shown in your task manager. 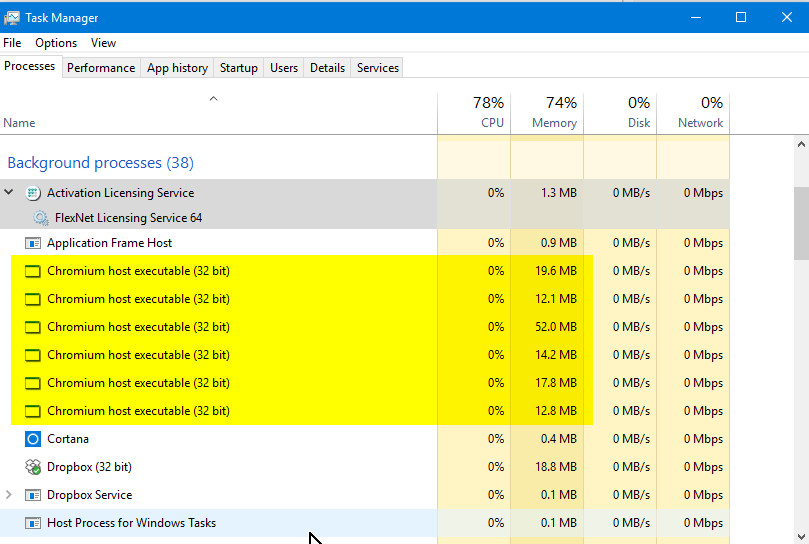 Basically, Chromium Host Executable is developed by Autodesk itself in order to optimize the performance and functioning of Autodesk softwares in your system and pass out the license permissions between the softwares. This is the essential kind of program developed to run Autodesk softwares seamlessly without any third-party software (i.e. Antivirus, Disk Cleaner, Windows Utility Software) interference in between the processing. The “Chromium Host Executable” does not originate to harm or damage your PC anyhow, it’s only preventing irruptions of third-party softwares in order to work properly.

Why Are You Facing “Chromium Host Executable (32 Bit)” Issue?

As we already cleared a bit above, if you’re using any third-party security/utility applications on your computer, those applications could create interruption or restricting the operations of Autodesk software. In that case, “Chromium Host Executable (32 Bit)” does help in continuing the operations of the Autodesk software without getting into any third party interference. When this process starts working on your PC in order to eliminate the interruptions, your PC gets working slow due to high CPU usage rate.

Now, most of the users might have a question in their mind; is that safe to keep this Program in my PC or should I remove/disable it?

Well, it’s totally up to you pals. This “Chromium Host Executable (32 Bit)”  program is trustworthy and completely safe to keep using in your PCs. It has all legal certificates and other digital ensured things state that it is safe to use and it doesn’t create any harm on your computer system. Also, there is no compulsion to keep that program in your PC forcefully. You’re free to remove or disable this program from your PC anytime.

So, let’s get started on how you can fix this issue in a few seconds by following easy-peasy methods. Since we’ve already analysed the issue, told you about the causes of it and we’re about you to explain the three working methods to fix “Chromium Host Executable (32 Bit)” issue on your Laptop/PC.

Also Read: How to Check and Update All New Windows 10 Features in 2020

Well, here we are going to explain you three simple methods to fix “Chromium Host executable” issue on your computer system. All three methods are safe, working, and self-tested by techieowl team already. We’re assuming you’re running the latest version of the software on your PC but in case if you’re not, then update it first into the latest version in order to process the below methods.

We’ve been already doing this quick trick to end any program who stopped responding to the operations due to high CPU load on the PC. This is the simple and quick trick to cut-off the unnecessary CPU usage load of your computer system but still we’ve explain this method in the steps below: 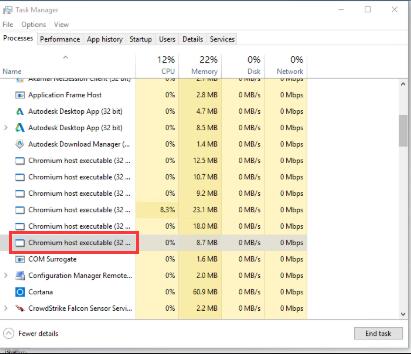 After ending the program from the Task Manager, you’ll see your CPU usage rate is getting down to the normal rate and the PC starts working normally as earlier. You will notice that your High CPU usage “Chromium Host Executable” issue will be solved here. If it will not then you should  try the other methods we’ve explained below.

Now, the program will stop working on its own in the background since you disabled it already and you’ll not face any high CPU usage rate (Chromium Host executable) and processing issues on your PC.

Last method you may try if the above methods didn’t work for you. The last and rest option is to uninstall all the Autodesk applications from your computer system to sort the “Chromium Host executable” issue for ever. You are always free to reinstall it again on your PC whenever you require it. Lets see the steps to uninstall the Autodesk softwares from your Windows PC.

To make sure of yourself, open the “Task Manager” and check the CPU usage rate. You’ll see the usage rate will go down back to the normal state.

By using the above methods, you can sort the “Chromium Host executable 32 bit” High CPU usage rate issue easily. If in case of any stuck or confusion, you’re always free to write to us regarding the issue you are facing. We’ll try our best to give you an exact fix on it. 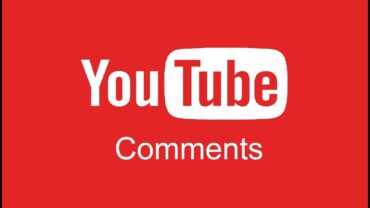